Tabernacle, the dwelling place of God is termed as “the Tent of Meeting.” It ‘was a place where God met with men. All the people came together to tabernacle to worship and offer sacrifices. The tabernacle was built by the children of Israel under the leadership of Moses.The instruction on how to build the tabernacle was first given to Moses in the wilderness, who then gave the orders to the Israelites. “…make a sanctuary for me, and I will dwell among them.” (Exodus 25:8). God told Moses to create the tabernacle exactly the way He commanded. It was not to stray from God’s blueprint. “Make this tabernacle and all its furnishings exactly like the pattern I will show you.” (Exodus 25:9).
Below are the details on how the Tabernacle was built.

Material and their symbolism:

There were three kinds of metals used in the construction of the Tabernacle: Gold, silver, and brass. All three of these metals are malleable, an essential quality when we consider that they were used primarily to overlay wood.

A total of 70 talents and 2, 400 shekels were used for the sockets (bases) of the sixty court pillars, the sockets of the 5 pillars of the sanctuary, the pins, and the brazen altar, and all of the vessels for it. (Ex 38:30-31)
• Fabrics – Colors: Blue means purification. White linen means purity. Red signifies the blood of Jesus and Purple stands for kingship.

There were two kinds of fabrics used in the construction of the temple, fine linen and woven goat hair. The linen would have been made from flax and used for the outer court curtain, the gate, the two veils, the curtain coverings, and the priest’s garments. Except for the outer court curtains, all of the linen used in the tabernacle had three colors: red, blue, purple.

The woven goat hair fabric was used only for the 11 curtain coverings of the temple. The goats in this area of the world are black so the fabric would have been black. The goat hair swells when it becomes wet, which makes it a watertight covering.

• Skin – Skins of animals, which are produced by the will of the flesh, symbolize sacrifice and covering. This, more than anything else, brings us into the realm of a life of intercession for others and an unselfish surrender for the good of the Body of Christ.

Ram skin – The skin of a male sheep died red and used for the second covering of the tabernacle.

Only one kind of wood was used for the tabernacle, acacia wood, also known as shittim wood. It is a hard, yellow-brown, fine-grained wood that turns darker and almost black with age. It was used for the boards, pillars, capitals, ark, incense alter, table of shewbread, and alter of burnt offering. All of the wood was overlaid with gold, silver, or brass, with the exception of the wood used for the sixty pillars of the outer court.

The bronze altar was the place of sacrifice. Bronze speaks of sin and the perpetual fire (Lev. 1:5-7) on the altar symbolizes God’s judgment against sin. Jesus died on an altar; it was called the cross. He died for our sins on that cross. He suffered pain for our sins.

The bronze laver was filled with water, and its base was made from the women’s mirrors of highly polished bronze (Ex. 38:8). This is a great picture of a person who trusts Jesus for the forgiveness of sins.

The lampstand, table of showbread and altar of incense are all made of gold. While bronze symbolizes sin, gold speaks of deity. The Holy Place is alive with symbolism about Jesus. The gold lampstand speaks of the One who revealed the Father to us – Jesus the light giver (Matt. 11:27).

There were three divisions in the Tabernacle:

The Outer Court
The Holy Place
The Most Holy Place

This area was surrounded by a linen fence, and within it stood the altar of sacrifice and the laver. The “outer court” was the courtyard. In this public place people mingled, talked and prepared to take deeper steps into the places of worship. This was the most familiar part of the tabernacle to most people.

The Holy of Holies was constructed as a perfect cube. It contained only the Ark of the Covenant, the symbol of Israel’s special relationship with God. The Holy of Holies was accessible only to the Israelite high priest. Once a year, on Yom Kippur, the Day of Atonement, the high priest was permitted to enter the small, windowless enclosure to burn incense and sprinkle the blood of a sacrificial animal on the mercy seat of the Ark. By doing so, the high priest atoned for his own sins and those of the people. The Holy of Holies was separated from the rest of the tabernacle/temple by the veil, a huge, heavy drape made of fine linen and blue, purple and scarlet yarn and embroidered with gold cherubim.

12 tribes of Israel and their camp positions around the tabernacle. 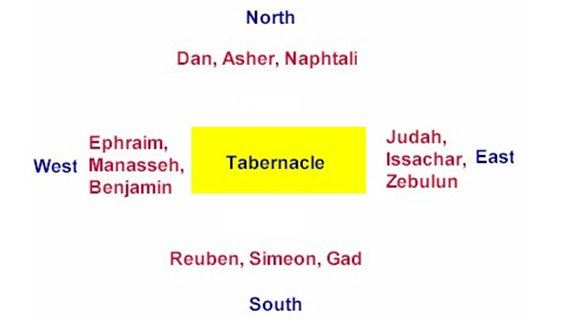 The tribes of the East.

The tribe of the South of the tabernacle

The tribes of the West of the tabernacle.

The tribes of the North

There were-seven specially constructed items placed in the Tabernacle for the worship of God and the service of the priests.

• The Brazen Altar
• The Laver (These were the only items in the Outer Court.)
• The Golden Candlestick
• The Golden Altar of Incense
• The Table of Shewbread (These three furnishings were kept in the first compartment -The Holy Place.)
• The Mercy seat
• The Ark of the Covenant.

The word tabernacle is still in use today. The tabernacle in Israel’s history was a temporary structure. It looked like a tent, but it was built carefully according to a given plan. Every detail in it had much significance because it showed the people of Israel how they should approach God in worship. In the New Testament, John writes: “The Word became flesh and made his dwelling among us.” (John 1:14) This word “dwelling” is the same word for “tabernacle” in the Old Testament. In other words, God came in living flesh to dwell or to tabernacle among His people. As He walked upon the earth and lived among the Jews, Jesus Christ Himself fulfilled the picture of the Old Testament tabernacle. In that and many other ways, as we will see, the tabernacle really was a prophetic projection of the Lord’s redemptive plan for His people.

“And I heard a loud voice from the throne saying, ‘Now the dwelling of God is with men, and he will live with them. They will be his people, and God himself will be with them and be their God.’ ” (Rev. 21:3)